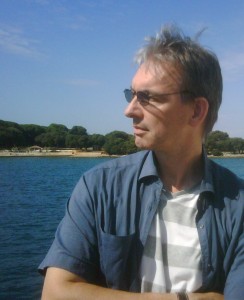 Gunther Nacke, the founder of Convers Energie, manages the company’s strategic operations. A native of Aachen, Germany, Gunther is an expert in engineering and systems design. He received his Bachelor of Science and Master of Science degrees in Electrical Engineering (BSEE & MSEE) from the Aachen Institute of Technology in 1987 and 1990. He also holds a Master of Business Administration (MBA, 1995) in International Management from Thunderbird, School of Global Management.

Before establishing his own solar energy and engineering services firm, Gunther worked as a telecommunications consultant for companies including Ericcson and Anderson Consulting. During three years in Paris, he learned to speak fluent French and enjoyed drinking cider with his Irish colleagues. Gunther has also worked in Aachen, Antibes, Athens and Berne; and spent one year in Phoenix, Arizona. Besides German and French, he speaks fluent English and conversational Spanish.

Gunther is a member of EuroSolar Bonn, the American German Business Club – Bonn chapter, and the Thunderbird Alumni Network. During 2011, he managed renewable energy projects for the city of Bornheim.

Mia received her MBA from Thunderbird, School of Global Management, in 2000. She also holds a BA in International Relations from the University of Washington and a Certificate of Advanced Studies in Environmental Diplomacy from the University of Geneva. Her interests include yoga, travel, film and the pursuit of the perfect cappuccino.